Rejecting Freedom and Progress (RPF) book begins by describing the conception of the self that was developed by the Enlightenment philosophers. It situates this self in capitalist order by describing this order in brief detail at the level of the market, civil society and the state. The relationship of the market and the state in globalizing capitalism is described and the crucial role played by America in sustaining this order is evaluated.

How To Use This Book

This book seeks to present the Islamic case against capitalism. It has been devised for use in Islamic study circles. It addresses three groups of Islamic students (a) generalists, who are not specializing in Western philosophy or the social sciences (b) students of philosophy and critical theory (c) social science students. Different reading schemes have been found useful for these groups and are presented below:

The material in this book was prepared for extention lectures given at the Sheikh Zayed Islamic Centre University of the Punjab in 2002 and 2004.
The First edition of this book was published in 2005 by the University of Karachi. The text remains as in the first edition.
I am deeply grateful to Prof. Dr. Jamila Shaukat, Director Sheikh Zayed Centre University of the Punjab for inviting me to give these lectures and for her gracious hospitality. I also thank Hafiz Abdullah and Mr. Ishtiaq Gondal for their guidance and support. I am also obliged to participants at a University College of London seminar on late capitalism held in July 2004 for comments on a paper which has been incorporated in chapter three of this book.

I thank the National Institute of Public Administration Karachi for permission to reproduce as Appendix 1 a paper which was first published in that Institute’s journal.

The ideas presented here have been developed by a group which has met regularly, since January 1992 at the Islamic Research Academy Karachi to study modernist / post modernist thought. This group indudes Ali Muhammad Rizvi, Abdul Wahab Suri, Idrees Ismail, Muhammad Younus Qadri, Ghulam Geelani Khan, Zeeshan Arshad, Muhammad Tahir, Mahbub Hasan, Javed Iqbal, Ameen Ashar, Zeeshen Arshad and myself. Although my name appears as author we are all equally responsible for this book.

I would like to thanks Mr. Abdul Qadeer Bukhari and Prof. Khursheed Ahmed (my teacher and mentor since 1962) for his patience and skillful editing and compilation from a badly written manuscript. 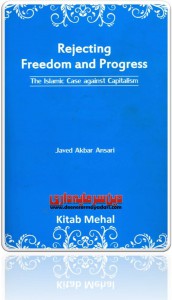 You will be directed to the Next (PayPal) Page for payment,where you may enter required Payment manually(Book + Shipping),according to your Region.